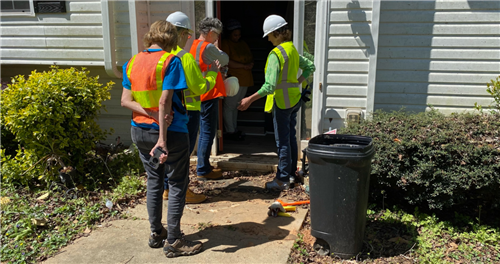 10/27/2022
Members of Alpharetta First UMC's Early Response Team pray with a homeowner in Newnan in March of 2021. Photo by Larry Garrard.

The North Georgia Conference received word this week that we have been awarded a grant of $500k for Newnan Tornado Recovery from UMCOR (the United Methodist Committee on Relief). This is the largest grant our conference has ever received from UMCOR.

In the weeks following the tornado, the Coweta Community Foundation Long Term Recovery Group formed, and as of September 2022, $478,184 has been allocated to recovery projects in Newnan. 8,206 volunteer workers have put in 52,650 volunteer hours. There have been 233 cases opened and 81 of those cases have been successfully closed. The North Georgia Conference is one of approximately 25 agencies that are actively collaborating to facilitate Long Term Recovery at this time and has a seat at the Allocations table that is helping to fund the Long Term Recovery. The Conference has contributed 10% of the total funds allocated to this point.

"Bill Pound, a layperson from Cornerstone UMC in Newnan and a long-time ERT (Early Response Team) leader and trainer, has been the key North Georgia Conference representative in the process, from responding immediately the morning of the tornado to taking the lead in the grant writing that resulted in the award of these funds," said Rev. Scott Parrish, Conference Disaster Response Coordinator.

The Coweta Community Foundation Long Term Recovery Group has identified three families to us whose homes were either a total loss or severely damaged where the cost to repair or rebuild far exceeds the funds available to them through Allocations. The North Georgia Conference will use the funds awarded by UMCOR to provide the assistance needed to return these families to safe and secure homes.

The families include a low-income family of five with a young child who has cancer. Their home was a total loss. Another family is that of a retired military veteran whose home had significant damage. His son and his son’s family lived in his home. Insurance paid for the upstairs portion of the home to be repaired, but there is additional work to be done in the basement to make it safe so that the upstairs can pass inspection. The third is a senior citizen family whose home sustained significant roof, interior, and structural damage during the tornado. This home, located in the historic Chalk Level neighborhood, was uninsured and is facing major repairs or full rebuild.

Most of the repairs/rebuild will be done by professional contractors, however volunteers will be used when possible. The funds may be used between December 1, 2022 and June 30, 2024. We anticipate that work will begin in December of 2022.

"Our Conference is deeply grateful for UMCOR as a partner and to the larger United Methodist connection that is making this possible," said Parrish.