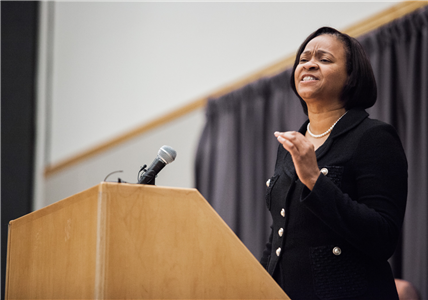 The jurisdictional episcopacy committee offered each candidate six minutes to share about two of the most important accomplishments in their ministry, where their passion lies and how they would bring their passion to life, if elected.

Rev. Lewis thanked the delegates for their encouragement of her and expressed her passion for inviting people to believe in and serve Jesus Christ and making a difference in the effectiveness of ministry.

She spoke about her time as senior pastor of Wesley Chapel UMC in McDonough, Ga., and her time as superintendent in the ADOX District.

As pastor of Wesley Chapel, she saw potential for clergy and laity to work together and she created a culture of call. In just three years 600 members joined Wesley Chapel and worship attended doubled. Partnerships were cultivated within the community. The result was a vibrant, revitalized church.
In her role as superintendent, she has reshaped the Atlanta-Decatur-Oxford District. Apportionment giving has seen a significant increase, she brought in five women as senior pastors, has worked to bring young adult clergy as senior pastors, and has made cross racial/cross cultural appointments. Through work with congregational development and a district strategic growth team, two new faith communities were launched by pairing new churches with historic churches.