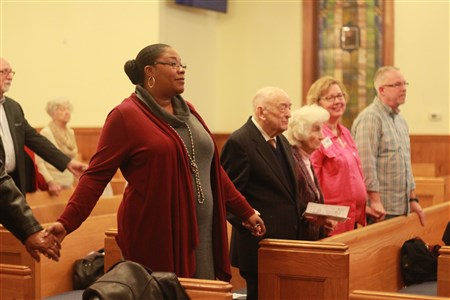 If you prayed for the United Methodist Church General Conference yesterday, you are in good company. More than 430 North Georgia United Methodist individuals and prayer groups committed to pray for 30 minutes increments from midnight to midnight on February 24. No one prayed alone. More than one person, and as many as 22, signed on for each 30-minute time commitment to pray.

People prayed from all 12 districts and as far away as Laguna Beach, California, Bronx, New York, and on a flight to Kenya.

In addition to the continuous prayer, special services were held around the Conference. At a prayer service at noon led by Dr. Anne Burkholder at Candler School of Theology, each attendee received a printed list of North Georgia's delegation so that each could be prayed for by name. 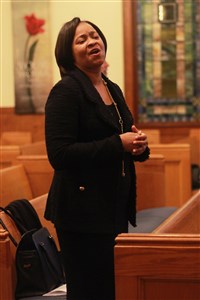 The Atlanta-Decatur Oxford District held a prayer service at Zoar UMC in Snellville on Wednesday evening.

The service began with three children leading a call to worship. Several worship songs were sung between prayers for each of North Georgia’s General Conference Delegates.

More than ten lay and clergy contributed prayers, including a prayer read in Spanish, while the congregation bowed their head and held prayer beads that were distributed at the beginning of service.

District Superintendent and Episcopal Nominee, Rev. Sharma Lewis, closed the service by asking everyone to hold hands and “look at the kingdom of God” as she lead the group in the Lord’s Prayer.

In addition to the services at Candler and Zoar, there were prayer vigils at Douglasville UMC, a UMW-sponsored service at St. Mark UMC, a prayer service at Oak Grove UMC and a time of prayer at Covenant UMC among others.

As we continue praying for our United Methodist Church, all are invited to join a General Conference prayer community and access resources created by The Upper Room. Subscribe to daily meditations via text or email at60daysofprayer.org/meditations.