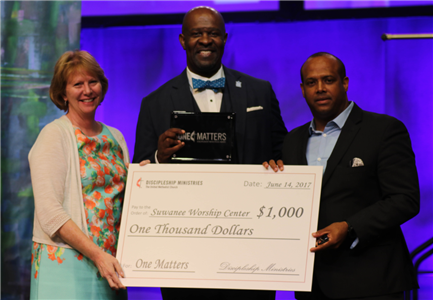 Each year, Discipleship Ministries of The United Methodist Church selects congregations for the "One Matters Award," recognizing that every new disciple—even just one—matters. The award is specifically given to congregations that had experienced decline but made a turnaround in growth with new baptisms, professions of faith, and of course, new members. This year the “One Matters Award” went to Suwanee Worship Center UMC in Suwanee, Georgia. It was presented at the North Georgia Annual Conference session in June.

Church pastor Rev. Ted Rollins was humbled to accept the award. When he was first appointed to Suwanee Worship Center (then called Suwanee Parish UMC) in 2012, the church was on “life support,” he says. On his first Sunday, he was greeted by about 20 attendees, no sound system, no musicians and no money. The church had been in a midst of a financial crisis a few months earlier that had literally wiped out its bank accounts. Also, it was nestled in an industrial park with little visibility. People weren’t just going to drive by and find the church – someone was going to have to lead them there.

It was a daunting place to start, but Rev. Rollins quickly went to work letting the community know that a new day had arrived. He recruited musicians and promoted the church and its ministries on social media. The following Sunday, there were 40 attendees – and the church just kept growing from there. Today, they regularly have about 300 in worship with a building that is bursting at the seams.

“I can laugh about it now, but it really is a testament to God’s grace,” says Rollins. “It just doesn’t make sense otherwise.”

Rev. Rollins and the congregation did put a lot of work into get where they are today. They changed the church’s name to help it sound more dynamic, built a social media network, remodeled the interior to create more openness, invested in family and youth ministries, and perhaps most importantly, worked to meet the needs of a community that was in need of a place to growth and flourish.

“Like it or not, we are still segregated on Sunday mornings. White churches in the area were exploding, but the African American market was really underserved,” he says. While the church is certainly open to all, Rollins does not shy away from delivering messages that address the unique needs of the African American community. He found that he needed to change up the worship to make it more accessible and more relevant.

An intentional discipleship system also helped facilitate growth. The church shifted from a traditional Sunday School model to a multiple small groups model. While Sunday School is still available, there are also classes at the church during the week as well as home groups.

“It’s really a grow/connect/serve model,” says Rollins. Helping people build relationships and grow closer to God together has been instrumental to the congregation’s success.

When asked why he believes God has moved in such a positive way in his community, Rev. Rollins answers, “I know it’s not me – I’m broken and flawed. I just believe people in this area were hungry for something relevant and real.” He adds, “It’s truly a miracle of God.”

Rachel Quartarone is a freelance writer in Atlanta.