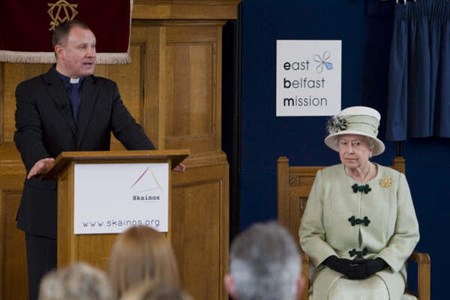 5/16/2019
Photo: Dr. Gary Mason speaks at the East Belfast Mission in Northern Ireland in 2008 at an event attended by Queen Elizabeth.

Dr. Gary Mason, a world-renowned and heavily consulted Methodist pastor, will be our guest speaker at the 2019 North Georgia Annual Conference on the topic of peacebuilding and reconciliation.

Mason directs a conflict transformation organization based in Belfast called "Rethinking Conflict." He spent 27 years as a Methodist clergy person in parish ministry in Belfast and played an integral role in the Northern Irish peace process.

Mason is a close advisor to Protestant ex-combatants on the civilianization efforts of paramilitaries. He was instrumental in facilitating negotiations with paramilitaries and government officials, and in 2007 his contribution was formally recognized by the Queen. In 2009, Mason’s church was the stage from which Loyalist paramilitaries announced their weapons decommissioning. Mason has lectured in political and academic forums throughout Europe, South Africa, the Middle East and the United States on lessons from the Irish peace process.

"I heard about the ministry of Gary Mason years before I met him," said Rev. Jessica Terrell. "When he reached out to form a partnership between Glenn Memorial UMC and the East Belfast Mission during my tenure there, I jumped at the chance to meet with and learn from him."

In the summer of 2011, Terrell had the opportunity to serve directly under Mason's leadership at the East Belfast Methodist Mission during an associate pastor swap.

"Those few months ministering alongside Gary and others of the EBM team taught me the value of questioning enculturated doctrines and how to listen beneath a person's story," she said.

Mason is an Adjunct Professor at the Candler School of theology at Emory University in Atlanta lecturing on reconciliation, peacebuilding, the history of the Northern Ireland conflict, racism, sectarianism and conflict transformation. Gary is also a faculty advisor and partner to the Negotiation Strategies Institute, a Harvard University program on negotiation.

He will present four times at Annual Conference in June, sharing his story, theological and biblical founds for peacemaking, human dynamics, linguistic wounds, and moving beyond conflict. His teaching will offer vital tools for churches.

"Gary is clear that Christians are called to love all neighbors, to build peace, and to tend to matters of justice in their communities," said Terrell.