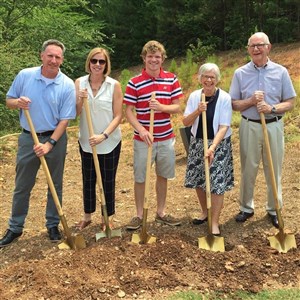 6/30/2016
Peachtree City UMC members representing three generations broke ground for the construction of a new church building. Pictured from L-R (Greg and Sandy Whittle, Connor Whittle, Jean and Steve Petty)
Sunday, June 26th marked the historic groundbreaking for a new 22,000 square foot multipurpose building at Peachtree City UMC. Dr. Steve Dodson, senior pastor at the Peachtree City church, said that “adding this building to our existing structure is the fulfillment of the church’s dream since 1999; to consolidate all ministries within the sixty acre property on Robinson Road.”

Dignitaries offering words of remembrance and historical perspective for the event were Mr. Bert McDade, founding pastor in 1974; Dr. Clay Jacobs, who served as senior pastor from 1981-1990; Mrs. Martha Thurman, who stood in for the late Dr. Jimmy Thurman, who was senior pastor from 1990 to 1996; and Rev. Herzen Andone, who served from 2008 – 2011.

Additional renovations will occur on the lower level of the current Robinson Road facility to accommodate Children’s Morning Out in the fall of 2016. After completion of the new structure, the preschool and kindergarten programs will be relocated from the former campus at Windgate Road to this newly renovated space by the fall of 2017.

In 2015 PTCUMC sold the property on Wingate Road and will use proceeds from the sale of that building to fund the majority of the new construction costs.
The new addition will be a pre-engineered steel frame structure with a brick exterior built to match the existing building exterior. The six member building committee has been working for over a year in the planning and selection of the chief architect on the project, Todd. Albritton. Albritton works with McLeRoy Construction, the general contractor. Selection of this design-build partnership helped the church reduce professional fees and provide efficiencies of scale in the overall building and renovation plan.

Peachtree City UMC is known for reaching out to their neighbors and connecting them with Jesus.