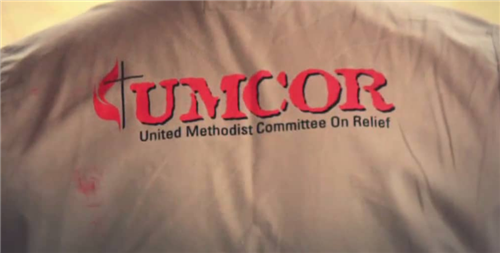 There was heartbreaking news of devastation after severe storms and tornadoes swept through Alabama and into parts of Georgia on March 3.

"I am praying for the families of those who lost their lives in Alabama, and for these dealing with wreckage in Alabama and South Georgia," said Bishop Sue Haupert-Johnson. "Prayers also for the first responders and those helping directly, including Rev. Robin Wilson, pastor at First UMC, Opelika, Rev. Jeff Wilson, Opelika District Superintendent, and North Georgia’s own Rev. Laura Eason, a deacon working with the victims."

In coordination with the South Georgia Conference, GEMA, and VOAD (Volunteer Organizations Active in Disaster), a number of North Georgia ERTs and chainsaw teams deployed to west Georgia in the past two weeks. Alpharetta First UMC, Northbrook UMC, St. James Atlanta, and Carrollton First UMC all worked in the Talbotton community.

Rusty Lambert, an ERT from Carrollton First, said the opportunity to serve was "such a blessing."

When they first arrived the homeowner was doubtful, frustrated, and unsure about the volunteers on his property. But as the day went on they had time for conversation.

"We asked him if he was afraid during the storm," said Lambert. "His reply was 'After what I saw in Vietnam, nothing frightens me anymore.'"

As they got to know him and he got to know them, a transformation took place. The team and the homeowner bonded.

The coordinator for disaster response in Talbotton called the Carrollton team leader later to tell him that the homeowner had asked to be sure the team knew he said thank you.

"He has been touched by the kindness of God's people. What may have seemed trivial to y'all was how God used you to touch him. Thank you. I too am blessed to have met y'all," he said.

This is just one story of transformation.

"I often say we need EVERY church from North Georgia engaged in prayer, study, giving, and going as we are largely unaffected, and the needs are so great throughout the southeast and US," said Rev. Scott Parrish, Conference Disaster Response Coordinator. "Note that WE are UMCOR, meaning every United Methodist is needed, in some way, in disaster response ministry."

"And the needs and opportunities go on," said Parrish. "Let me know how I can help you put your church into action in early response or long term recovery."

If your church would like to be part of the coordinated UMCOR response to disaster, contact Parrish at scott.parrish@ngumc.net.

Financial donations may be made to any North Georgia United Methodist Church. Mark gifts for NGUMC Fund #4390 US Disaster Response.