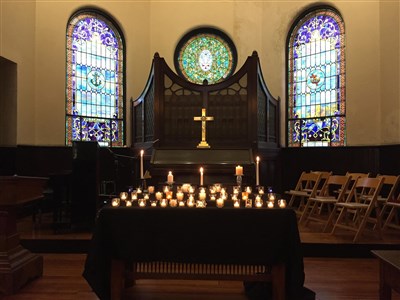 Inman Park UMC in Atlanta, pictured, placed 49 candles on the altar for its Tuesday evening prayer service. The church also had a cloth that adults and children could write prayers or draw on, a station for people to light a candle, and a small labyrinth.

Members of Cornerstone UMC in Newnan gathered for prayer on Monday. The Emory University community gathered for a vigil in Canon Chapel on Tuesday. St. Mark UMC in Atlanta joined a host of agencies and churches to hold an interfaith service at the Center for Civil and Human Rights in Atlanta. North Decatur UMC and Inman Park UMC each held community prayer services Tuesday evening.

At Inman Park's service, adults and children were invited to write prayers on a cloth. At Sunday worship, they plan to incorporate the cloth.

"We are adding the names of victims and shooter to the cloth and will use it as altar cloth Sunday," said Rev. Max Vincent. "Kids will make a prayer chain during worship which we will then use to surround the altar, as a way to show that all this grief and pain is surrounded and lifted to God in our prayers."

St. Paul UMC in Atlanta will hold a vigil on its front steps at noon on Sunday. The church will toll its bell for each victim.

Young Harris College chaplain Rev. Blair Tolbert posted the name of each of the victims to Facebook one by one with the prayer, "May your perpetual light of grace shine forth into the darkness of fear and sorrow. Lord in you mercy, Christ in your mercy. Amen." She asked with each post for others to remember and pray for their family, friends, and community of that person. They range in age from 18 to 50. Many more North Georgia clergy shared their prayers.

Glenn Memorial UMC in Emory's Campus called on its congregation to "create" in response to the shooting. "We must allow our imaginations to prompt us, move us, and challenge us to ask: What could this world look like instead of what it is now?" they write. Read the blog post at Glenn Memorial's website.

Rev. Jimmy Moor, Church and Society representative for the North Georgia Conference, said he turns to Jeremiah 8:21-9:1. "For the hurt of my poor people I am hurt. I mourn, and dismay has taken hold of me. Is there no balm in Gilead? Is there no physician there? Why then has the health of my poor people not been restored? O that my head were a spring of water, and my eyes a fountain of tears, so that I might weep day and night for the slain of my poor people!"

"The prophet speaks for us as we reel from the shooting in Orlando that left 50 people, including the shooter, dead, people who bore the image of God. The targets were members of the LGBTQ community, a vulnerable, oft-targeted group. We grieve and lament this loss of life. We feel anger, we feel fear, and we struggle to know what to do in response," Moor said.

"We begin our response with prayers of lament and move to prayers of faith and hope. Many will respond by giving much needed blood and with other concrete acts of compassion. I suggest one other response. Let us each look at our own life to see where we may have spoken in hate or  may have been less than accepting of those who are different from us. Let the church commit to speaking words of healing and hope as we share the love of God for all persons - all persons - and work toward becoming a community that embodies love and justice rather than hate and violence," he shared. "May God guide us to be faithful in the days to come."

Tuesday evening First United Methodist Church of Orlando hosted an interfaith service in its sanctuary, and collected water and non-perishable snacks for first responders and medical professionals. The Florida Conference of the UMC, which begins its Annual Conference session in Orlando just days after the shooting, will host a prayer vigil on Thursday, June 16, at 9 pm.

After Hate, Orlando Church Offers Hope
"The church lived out the sermon" at St Luke's UMC. People waited in line as long as three hours Sunday to give blood at the Orlando church following the tragic shooting.
READ MORE