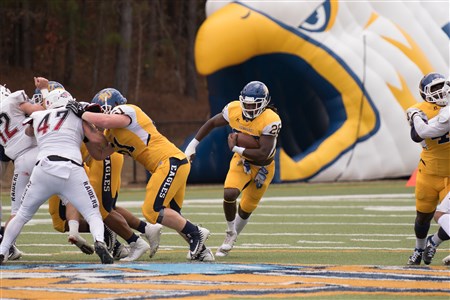 When Reinhardt University embarked on the creation of a football program, leaders hoped for a successful program. Yet no one expected the grand success – both on the field and in the classroom – that Reinhardt Eagles football has enjoyed during its brief five-year history.

With a double-overtime win over the Southern Oregon Raiders last weekend in Waleska, the team will compete for the first time in the NAIA Football National Championship Game in Daytona Beach, Florida on Dec. 16, 2017 vs. the University of Saint Francis (Ind.).

Prior to the May 2011 Board of Trustees approval, the University established a committee of students, faculty, staff and community members to explore the option of adding football. Hasty said that the one thing stakeholders expressed was the desire that the University maintain its strong Christian values.

“I believe we have been able to do that,” Hasty said.

The foresight and planning is something that Reinhardt Athletic Director Bill Popp believes has led to the program’s current success.

“Doing our football study one year prior to starting really let us hit on important points that we wanted to succeed with early,” Popp said. “Hiring an experienced coach who would be able to handle a large class of freshmen and then to make sure we emphasized character and academic success as two very important program goals.”

That experienced coach the University hired was none other than Dr. Danny Cronic, who, at the time, had more than 30 years of experience as a head football coach and already had established himself as one of the best. He already had been named to the Coweta County and Cherokee County Sports Halls of Fame, and was used to working with young student-athletes.

Cronic is not surprised by the team’s fast-paced success and said he told University officials when he was hired that if they gave him the ability to hire good coaches and assistants that the team would be successful. That support from the administration was granted, and the Eagles football team took flight.

“That success is what happened,” Cronic said.

In his first season as head coach, Miller’s squad is vying for the chance to be called the best in the NAIA, but Miller gives the credit of success to the student-athletes, the assistant coaches and his predecessors, Danny and Drew Cronic.

“They laid the foundation which was speed, toughness, discipline and hard work. Our kids completely bought into that and credit goes to the kids,” Miller said. “They have put a lot of work in these last three years, going from the first round to the semis to the national championship. They are the ones who put the work in between the white lines.”

While the team has been successful on the field, academics and character are of the utmost importance to Reinhardt leadership past and present. It was a founding principle when the program was established and coaches, faculty and staff are ensuring that they don’t lose sight of that goal.

“We always talk about how each aspect correlates with the other,” Miller said, adding success in the classroom or socially does not equal success on the field and vice versa. “You have to do all the things. They correlate with each other, and they feed off of each other. We talk to our players about how every day is an interview; you never know who you are going to come across in life who is going to help you in some facet. That’s a big deal to us as well. It also is about being a representative of your university, being a representative of your family and, most importantly, of yourself. How do you want to be perceived? Our young men take that to heart.

“The most important thing I can give them is not a national championship, it’s a degree and being able to propel our kids in life more than just in football.”

In the true nature of upholding Reinhardt University’s mission, this team gives back to its community by volunteering in various Cherokee County schools, Goshen Valley Boys Ranch and at other nonprofit organizations. The team has been recognized for its outstanding service on multiple occasions.

“They truly are a wonderful partner. They not only come in and read to the students but Pumpkin Palooza is one of the main events they participate in,” said R.M. Moore Elementary Principal Abbey Philpott. “They get right in and play and participate with the students, and it’s really nice to see that interaction between the two and those football players giving back to the community.”

From the vision of a group of the Reinhardt University family just a few short years ago to the opportunity to compete in the national championship title game, the Eagles’ tremendous success did not come without hard work, dedication and perseverance.

“It takes a lot of hard work to play football,” coach Danny Cronic said. “They have to work hard to play football, from watching video to weight lifting, conditioning and summer work to keep in shape, and overcoming injuries. Then add on top academic responsibilities and community service, these players are to be admired. I have enjoyed coming and watching them play, and I feel a close kinship with all of them.”

And that first coach who established such a strong foundation for the program will be in Daytona Beach cheering on his Eagles.