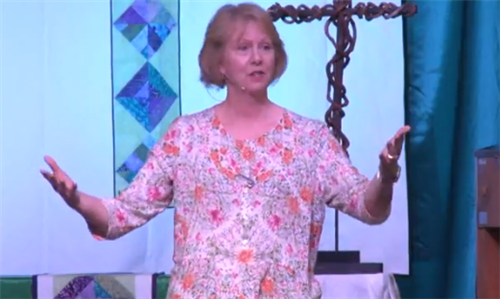 From July 16 through the 19, numerous clergy of the North Georgia Conference gathered at Epworth By The Sea on St. Simons Island to learn about engaging their communities in the mission of their church. Bishop Sue Haupert-Johnson preached on Wednesday evening, telling the story of William Wilberforce, the early Methodists, and how to rekindle the mission today.

Bishop Sue began her sermon with a history lesson on William Wilberforce. Wilberforce was an Englishman born into immense privilege, but tragedy hit when he lost his father and sister. He was sent to live with his aunt and uncle at the age of 8. He became interested in the Methodists and evangelical Christianity due to his relatives' influence, especially that of his aunt Hannah, sister of the wealthy Christian merchant John Thornton. Thornton was a philanthropist and a supporter of the leading Methodist preacher George Whitefield. Because of his Methodist upbringing, Wilberforce was convinced of the importance of religion, morality, and education. He, along with a group of Methodists called the Clapham Circle, championed causes such as the British missionary work in India, the creation of a free colony in Sierra Leone, the foundation of the Church Mission Society, and the Society for the Prevention of Cruelty to Animals.

Wilberforce’s mother was not happy when she found out about his new found religion because Methodists were hated in England for being too political. Bishop Sue explained that Wilberforce gave his life to two causes: first, to abolish slavery in the British empire; and second, restore manners, integrity, and civility to the British culture.

Bishop Sue reminds us that the gospel is political.

“They do not crucify people who are not political,” she says.

As Bishop Sue continued her sermon she says she is reminded of Jesus’s arrest in the Garden of Gethsemane. Jesus, instead of condoning his disciples violence, moves to heal the ear cut off by the disciple’s sword. Jesus calls us to be agents of reconciliation and peacemakers, in essence saying, “don’t defend me, BE me.”

She says that every United Methodist should have a new vision, the vision of the table. This should be the vision that propels us. She reminds us that all God’s children and need a place at the table.

Bishop Sue issued a challenge to clergy. “Your role as clergy is not to spend your life visiting members. It is not to make the people in your pews happy. Your job is to claim God's reality and take it to a culture that is dying.” The job is to help transform the culture of a congregation, show them how the people of God have moved throughout the ages.

“The congregation is not your group to tend to, they are your partners in ministry and you are called to equip them,” she said.

We must rely on the Holy Spirit to drive the church, she said in closing.

“We must reclaim prayer, reclaim the spiritual disciplines, reclaim the power of the Holy Spirit. That is the only thing that will transform the church,” she said. “God is at work, the Methodists are alive, we just need to reclaim our movement. And our movement will work better if we are all together.”

Watch Bishop Sue’s sermon along with other preachers and speakers at the 2018 Georgia Pastors’ School at http://www.georgiapastorsschool.org/2018-resources/.