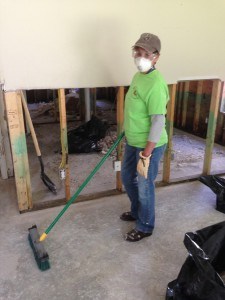 Below is a report from Mount Pisgah's team:

We were deployed to Charleston, South Carolina, and were on the front lines for recovery from October 18-22.

Our first mission was to clean out the home of George and Jean* who had flood water two feet high throughout their home on October 4. On October 19  and 20  we removed the wet dry wall and insulation from the entire home and chemically treated the wood frame to mitigate mold. George and Jean told us that the home had been flooded before and, consequently, they could not get flood insurance. George is a fireman with limited resources, but they brought us lunch and prayed over us. We were blessed by the opportunity to be in Christian service in their hour of need.

The next day, October 21, we were assigned to assist John and Mary*, whose home had two feet of water in the garage and three inches of water in the rest of the house. They had been using the garage to store many of their precious personal belongings which were inundated on the night of October 5.

The first order of business for the  team was to assist the survivors in salvaging what they could from the water logged remnants of their belongings. The survivors were clearly traumatized by events. Our Care Team members ministered to their spiritual needs while we assisted them in sorting through a lifetime of memories.

The water that flooded the remainder of the home had soaked the floors which were comprised of a plywood subfloor and oak laminate overlay in the living room, family room, and bedrooms, and composite and linoleum in the dining room and kitchen. The family was still living in the home two weeks after the disaster so all of the furniture was still in place. We elected to move the furniture to one side of each room, remove the overlay to enable the subfloor to begin to dry, then move the furniture to the other side and repeat the removal process. Your team has blessed to have spent the day caring for the survivors, salvaging their precious lifetime memories, and helping them begin the long process of recovery.

On Day Four of our deployment, October 22, we were called to Walterboro, SC where the winds during the storm had blown shingles from the roof of a home and caused multiple leaks. Our mission was to cover the roof with tarps to avoid further water damage until the roof can be replaced. The home was of modular construction with sheet metal siding which would not allow us to secure the tarps to the sides of the structure. The team decided to innovate and secure the tarps using a system of ropes and ground anchors. With the tarps thusly secured, we cut and taped the roof vents and provided the home with a secure temporary roof. The home owners with be high and dry at least until they can get their roof replaced.

Trained ERTs are still needed in South Carolina. If your team is available, call the South Carolina Conference hotline at 1-800-390-4911.