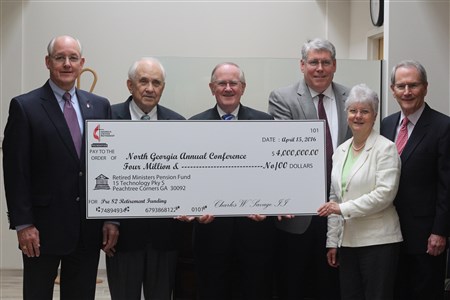 The Retired Ministers Foundation has made a gift of $4 million to the North Georgia Conference to go toward the Conference's Pre-1982 Retirement Plan liability.

“When we voted to make this gift, we decided to make it in memory of Randall Williamson,” said Tomlinson. “More than 20 years ago he suggested that when the end was in sight, the Retired Ministers Foundation should pay the last dollars.”

Based on projections provided by the Conference Treasurer, the Foundation decided that they would do just what Rev. Williamson had suggested this year.

“Apportioned giving has provided the bulk of the funding to get us to this point,” explained Conference Treasurer Keith Cox. “Thanks to strong leadership over many years this has been a focus of the Conference. Due to apportioned giving, together with proceeds from the sale of the Simpsonwood property, and the generous  gift from the Retired Ministers Foundation, we are fully funded.”

The 2015 and 2016 budgets both reflected substantial reductions in the amount apportioned for the pre 1982 plan as a result of the Simpsonwood sale and in anticipation of the gift from the FRM.

Cox cautioned that the term "fully funded" is an estimate. Economic headwinds resulting in lower than projected investment returns and other assumption variances can all affect the actual cost of the plan. Because of that there will continue to be a small budget line item for the foreseeable future

“We will make sure that we remain in a fully funded status” said Cox.

The Pre-1982 Plan and other clergy pension plans are denomination-wide plans.

“The Pre-82 Plan was frozen to new participants as of 1982,” explained Cox. “It provides a defined benefit to any clergy person who had service in the years covered by the plan."

Clergy who began service after 1982, are covered by the Ministers Pension Plan (MPP), a defined contribution plan for clergy who worked from 1982 through 2006, and/or the Clergy Retirement Security Plan (CRSP) adopted by the 2004 General Conference.

Bishop Watson is a former chair of the General Board of Pension and Health Benefits of The United Methodist Church. The pension program is more than 100 years old, but it took many years for that pension to get to a livable amount, explained Bishop Watson.

“This gift means that the North Georgia Conference loves and cares for retired pastors and those will will retire,” said Bishop Mike Watson. “This Conference wants to care for those who serve and their families.”
News