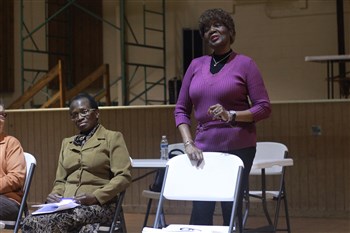 Riverdale UMC decided to look into its past in order to enhance their future. Congregants gathered at the church Saturday, January 9th for Getting to Know Your Neighbor, an event that invited members of multiple ethnicities and generations to come share their stories of how they came to Riverdale UMC and how they’ve seen it change.

“Church is like a bank,” one story teller explained. “You have to put something in it in order to withdraw something from it.”

Another speaker told of her struggle to find a church that was accepting of all races. She recalled attending churches who waited until the younger members returned to college before voting on accepting African American families as members, because the older members did not approve of the students' progressive thinking. She was even fired once, as a pianist, for speaking to “the help” at her job.

When she came to Riverdale UMC, the congregation was mainly Caucasian, but was becoming a more diverse congregation. She has seen many families leave during her time there, but she also witnessed the strengthening of a multiethnic community.

“We’ve joined together here as a haven, as family,” she said.

One woman came to Riverdale UMC from Zimbabwe, with her sister in 2000.

“Everyone knows me here,” she says, as she commended the church for its support during the loss of her mother.

A woman who came from a very hospitable church in New Jersey said she even called Riverdale UMC after she moved to Georgia to ask if they were accepting of multiple ethnicities. When she attended service that Sunday the pastor pulled her aside.

“You can feel comfortable here,” he told her.

She, along with the other speakers, said that they know there are flaws within their church, and they know that some people will leave if they are unhappy, but they choose to stay and work out the problems together. 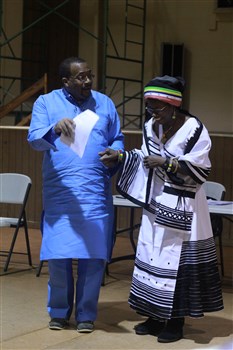 Lead pastor, Rev. Moses Woodruff Jr. recognizes the importance of tapping into the past.

Woodruff plans to use Saturday’s discussion as a part of his doctoral dissertation. One of his professors even attended the event. Members were clearly committed to the work of their pastor. Though several in attendance had to work on Saturday, they made time to participate in part of the Getting to Know Your Neighbor event as a show of support.

Riverdale UMC has always been a small church, but it hosts a congregation of at least 23 different ethnic groups. While each speaker told of witnessing culture changes, the coming and going of pastors, and were honest about the struggles and disagreements they have at times, everyone also spoke of their love and devotion to their spiritual home.

Would you like to dive into the stories of your congregation? Contact Rev. Moses Woodruff to learn how.

View photos from the event in our upgraded photo gallery!