In 1960, almost 60 years ago, Martin Luther King said to the press that one of the tragedies of our nation is that 11 o’clock on Sunday morning is the most segregated hour in Christian America. He passionately preached that this reality stands against the spirit and the teachings of the Lord and, as long as our churches are segregated, we fail to be a true witness to the world. Wow! 60 years later I can just still eat that up.

We can say that the Christian church is no longer segregating but it is still very much segregated. Research conducted in 2015 indicates that for many Christians, being racially segregated on Sunday morning is ok and we even like it that way. We like to be segregated, that is. More than 60 years later, we just use a different word like, “polarization” “division” “social stratification” “isolation,” but we are still segregated.  We are increasingly surrounding ourselves with people like us — who look like us, talk like us, whose views, opinions and even bank accounts and stock portfolios look like us. The most influential Rabbi of our time, Rabbi Jonathan Sacks, has warned us, “When we surround ourselves with people just like us, we get more and more extreme.”

So on October 7, on World Communion Sunday, three congregations in Rome — Metropolitan UMC, Rome First UMC, and Second Avenue UMC — got together to worship and fellowship. We combined our children’s choirs and I preached. After the service, we surrounded ourselves with people we did not know before around food and it was just fantastic! It was a glimpse of the beloved community that King dreamed about! 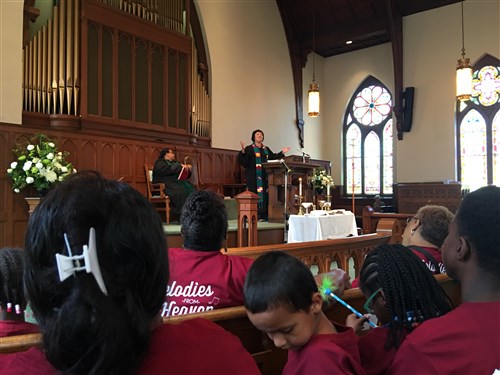