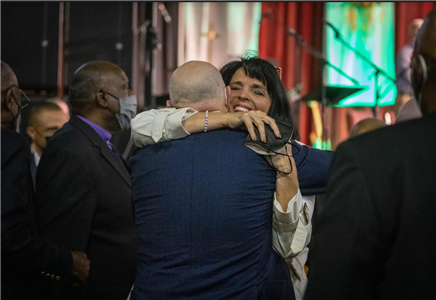 The Rev. Dr. Connie Mitchell Shelton, district superintendent in the Mississippi Conference, has been elected as bishop in The United Methodist Church’s Southeastern Jurisdictional Conference.
Delegates elected Shelton, 58, elected Wednesday, November 2 at the jurisdiction’s meeting at Lake Junaluska, North Carolina, on the 12th ballot. She received 213 votes out of 350 valid ballots cast. She needed 210 to be elected.

Shelton was the second bishop elected at the November 2-4 meeting, after Rev. Tom Berlin of the Virginia Conference.

Her two-year term of service begins January 1, 2023. In the United States, bishops are elected to serve for life.

Shelton was the endorsed candidate of the Southeastern Jurisdiction Clergywomen’s Caucus, and was supported by the Mississippi delegation to General Conference and the jurisdictional conference. Raised in the Southern Baptist tradition in her native Mississippi, she later found that Methodist theology resonated in her life. She subsequently joined Oak Grove United Methodist Church in Hattiesburg, Mississippi, where she and her husband, Joey, served as volunteer lay youth directors. Eventually, both she and her husband discerned a call to full-time ordained ministry.

She has a bachelor’s in radio, television and film and master’s in public relations, both from the University of Southern Mississippi. But after accepting the call, she and her husband sold everything and moved to Durham, North Carolina to study at Duke Divinity School.

Since 2015, she has been superintendent and missional strategist of the East Jackson District in the Mississippi Conference. Since July, she also has served on a team of four superintendents overseeing the Hattiesburg District.

She previously served as director of connectional ministries and communications for the Mississippi Conference. Before that, she served in appointments at both rural and urban United Methodist churches. She also was executive director of The United Methodist Hour television and radio broadcast which reached across the Southeastern United States.

Her husband is the dean of the chapel and director of church relations at United Methodist-related Millsaps College in Jackson, Mississippi. The two have two adult daughters, Bailey and Jessica.

In The United Methodist Church, bishops are ordained elders who are called to “lead and oversee the spiritual and temporal affairs of The United Methodist Church.” Bishops, in consultation with district superintendents, are responsible for appointing clergy. They also preside at annual conferences, jurisdictional conferences and General Conference, the denomination’s top lawmaking assembly.