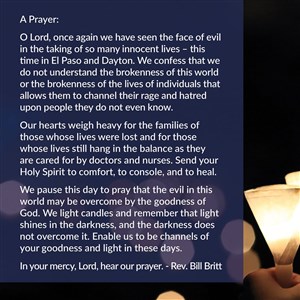 After two U.S. mass shootings that left at least 31 people dead and many more injured in one weekend, United Methodists arrived at worship Sunday morning with heavy hearts. Bulletins were already printed and music had long since been selected and rehearsed, but nevertheless, North Georgia clergy made time to speak to the tragedy.

"I addressed the shootings in our prayer time at both churches and also in the sermon," she said.

She called for prayer and action, asking, where are we sowing hate that we ought to be sowing love? She addressed partisan politics and hateful words.

Rev. Rob Bruce of McEver Road UMC also re-wrote his sermon Saturday night. He changed the paraments in the church Sunday morning to red and wore a red stole.

"My point was that red symbolizes the Holy Spirit but also Christ’s redemptive blood," said Bruce. "I made the point we need to make sure that the blood spilled in El Paso and Dayton is made redemptive. I quoted part of Rev. Dr. Martin Luther King, Jr.'s eulogy of the little girls who were killed in the Birmingham church bombing: 'And so my friends, they did not die in vain. God still has a way of wringing good out of evil. And history has proven over and over again that unmerited suffering is redemptive. The innocent blood of these little girls may well serve as a redemptive force that will bring new light to this dark city.'”

It is a challenge for clergy to find the right balance between quickly responding to tragedy in our world and sharing the clear and steady message of Jesus.

"If we engage every issue every Sunday, there would be no time to talk about Jesus!" said Rev. Dalton Rushing of Decatur First UMC. "There are times, though, when issues rise to the forefront and must be addressed, by the pastor, from a faith perspective."

Rushing addressed the shootings in a moving pastoral prayer.

"People want to know how to live their faith in the real world, not just in a hypothetical one," he continued. "When addressing current events of any kind--especially complex, entrenched dynamics like matters of white supremacy--I rely upon a lot of conversation with others before doing so."

Rev. David Blackwood of Wesley UMC in Evans addressed the shootings in both the pastoral prayer and in the sermon, which was about sin's ability to isolate us from relationships with God and each other. But he also acknowledges the inadequacy of words.

"My first DS gave me the best advice before I went into a difficult hospital visit: 'Be present but say little.' The truth is that our words are inadequate to fully express the pain, hate, and sorrow of such events," said Blackwood. "Sometimes our role isn't so much to be the mouthpiece of the people but to be a place that people can mourn, emote, and share while we point them back to the unconditional love of God."

Looking for a way to communicate beyond words, Rev. Rodrigo Cruz of The Nett UMC bookended his pastoral prayer with a hymn “I Have Decided to Follow Jesus.”

"I emphasized that if we are deciding to follow Jesus, we are committing to resist and stand up against this type of evil," said Cruz.

"I keep getting up, keep stepping up, and keep doing it because I understand that my call as a minister of the Gospel of Jesus Christ is to make disciples - equip the saints for the work of ministry (Eph 4:12)," she said. "Disciples are people who, in everything we do and say, behave as if we are striving to be Jesus in this world with skin on. This is hard work. It is countercultural. It is antithetical to societal standards. Jesus is the radical way of being in the world."

Rev. Steve Wood preached from Jeremiah 29 at Mount Pisgah UMC Sunday. The passage naturally offered an opportunity to speak to the tragic shootings. He also responded in the pastoral prayer. Outside of church on Sunday, Wood posted the scripture passage from his sermon on social media, renouncing all forms of evil including racism. That evening he led the church's school board in prayer for all those affected.

At the end of the service at Peachtree Road UMC, Rev. Bill Britt addressed the massacres in his benediction:
"... The root of the problem is evil, and the only solution to the evil present in this world is the goodness of God. Light shines in the darkness and the darkness does not overcome it. As you leave this place today, allow the light of Christ to through you and work to overcome the evil in this world by the goodness of God."