Sue Haupert-Johnson Assigned as Bishop of the North Georgia Conference 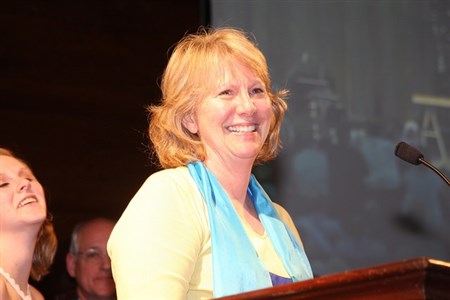 The Southeastern Jurisdiction Committee on Episcopacy announced Thursday, July 14, that Bishop Sue Haupert-Johnson has been assigned as the next bishop of the North Georgia Conference. The assignment begins September 1. The North Georgia delegation greeted "Bishop Sue", her husband Rev. Allen Johnson and their daughter, Samantha, at a reception immediately following the announcement.

Haupert-Johnson, 54, was elected bishop Wednesday, July 13, at the jurisdiction’s quadrennial meeting at Lake Junaluska. On the tenth ballot, she received 230 of 375 votes cast.

I hope you will go and spread a table "with a sumptuous gospel feast," she bid the delegates. In her introduction address on Tuesday, Haupert-Johnson stressed the need for the church to have room for everyone at God's table.

Haupert-Johnson was the fifth bishop elected by the 376 delegates, an equal number of United Methodist clergy and laity, from the nine states that form the Southeastern Jurisdiction (SEJ).

Haupert-Johnson, nominated by the Florida Conference, is the current district superintendent of Florida’s Gulf Central District, overseeing a church landscape of large and small congregations in a mix of urban, suburban and rural communities. The district’s demographics are diverse as well.

Haupert-Johnson has had numerous leadership roles in the Florida Conference and has represented the Florida UMC twice at General Conference – serving as Judicial Administration Legislative Committee chairperson in 2012 – and three times at jurisdictional conference.

Her assignment in our conference is for a four-year term and begins September 1.