Giving Thanks for Terry and Sue Raymond: Models of Quiet, Steady Leadership and Service 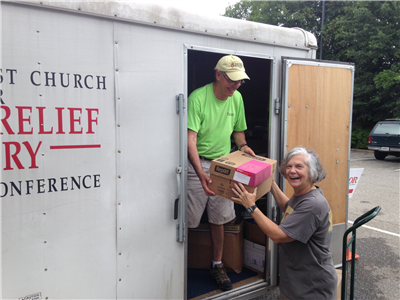 The season lends itself to give our most gracious, heartfelt thanks to North Georgia United Methodists who are the hands and feet of Christ in our communities.

One such couple has left an indelible mark on the North Georgia Conference of The United Methodist Church. Our gratitude for their service is bittersweet as we bid farewell to Terry and Sue Raymond, who, early next year will be retiring to the Pacific Northwest.

“I don't know if there are any two people who have done more for the ministry of our conference across decades," said Sybil Davidson. "I don't know how we'll fill their shoes.”

Members of Zoar UMC near Stone Mountain, Terry and Sue each have a lengthy list of volunteer duties they have taken on over the years. Terry has held leadership positions involving everything from being a church trustee, to serving on the Housing and Homeless Council, to serving as Conference Secretary for Global Ministries.

Likewise, Sue has served on the Boards of Aldersgate Homes, Glisson Camp and Retreat Center, and Camp Wesley, among others. She has been highly involved with the United Methodist Women at the conference and national level, which presented the Raymonds with all sorts of mission opportunities ranging from education to collecting relief kits.

Additionally, the Raymonds have served on the Conference Mission Committee for many years and have been active with hosting missionaries who are stateside during their itineration. They also served on the conference committee that interviews potential missionaries.

Of course, simply serving on a Board isn’t enough when the Raymonds approach God’s work. At Aldersgate/Collinswood, the couple delivers and sets up furniture in homes. They cleared out trees after a hurricane.

According to Scott Parrish, Conference Disaster Response coordinator: “Terry and Sue are the epitome of selfless, servant-oriented mission champions who go above and beyond. While I've seen such people in every congregation I've served, I hadn't seen that at a conference level until I met Terry and Sue. They follow Christ, serve the larger Church, and bring lively faith, hope, and humor that helps many churches to be in God's mission.

“The Raymonds don't seek a spotlight,” he added. “I don't even know all they've gotten into for good works, as they quietly and effectively have kept at the work for the last decade or two.”

Terry and Sue – we are thankful for your ministry. We will miss you greatly and wish you well.