The Lord is Lord of All: Service of Ordination, Commissioning, and Licensing 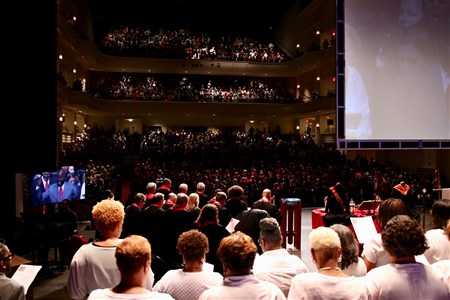 Tonight we came together to praise God, to hear the holy word, and to seek for ourselves and others the power, presence, and direction of the Holy Spirit. We celebrated a sacred moment for 27 licensed local pastors, 18 provisional elders and deacons, two ordained deacons, and 16 ordained elders.

The magnificent Ben Hill UMC Choir set the tone for the service.

Rev. Dr. Alice Rogers preached on Paul's First Letter to the Corinthians, Corinthians 12:4-14, 26-34. She described the vast and varied nature of our country, yet we are known as the United States of America.

"We aren't all the same," she said. "We make jokes about the way of life in other parts of the country, but anywhere else in the world if we run into someone from another part of the U.S., we'll embrace like we're cousins. We're the same in our citizenship."

We understand that concept, she said, as we gather here tonight.

"We are all different, and yet the same Lord is Lord of all. And the same spirit breathes upon and empowers us all," she said. "This is the concept the Apostle Paul celebrates."

On our very best days, she explained, we not only believe this, but we act like this.

After the last elder had been ordained, Bishop Sue shared that many years ago she was ordained by Bishop Cornelius Henderson, a beloved son of this Conference. He spoke often of his church, Ben Hill in Atlanta. Tonight, Ben Hill UMC's choir took part in this service as she ordained others.

"God calls so many different people, and God keeps calling because the world cries out for those who will tend to the brokenhearted, to the weary, to the sick, to the lost," said Bishop Sue.

We praise God for those who tonight said, "Speak Lord, your servant is listening."