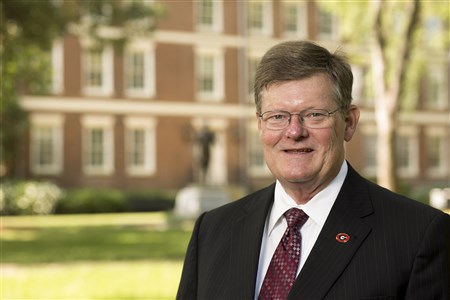 The North Georgia Conference Board of Laity has announced that a familiar face (and voice) will be this year's speaker at the Annual Conference Laity Luncheon.

Before retiring in 2017, Tom spent 27 years in the senior administration of the University of Georgia, the last nine of those years as Vice President for Public Affairs. He was responsible for institutional public relations strategies and served as UGA’s institutional spokesperson. He currently serves as executive director of the Georgia World War I Centennial Commission. This role came in connection with his part-time position as Heritage Communications Executive within the chancellor’s office at the University System of Georgia

Despite these accomplishments, he might best be recognized as the “Voice of the Redcoats” – since 1974 he has been stadium public address announcer for the University of Georgia Redcoat Band.

"Tom is a committed United Methodist and he will speak of his faith and how it has shaped his public career," said Lay Leader Bill Martin. "I am thrilled Tom Jackson has agreed to be our speaker for the Laity Luncheon."

Tom holds an associate's degree in history from Oxford College of Emory University, and three degrees from UGA: a bachelor's in history, a master's in public administration, and a Ph.D. in higher education administration.

He and his wife, Sherry, live in Oconee County and have two grown sons and five grandchildren.

The Laity Luncheon will be held Wednesday, June 12, at The Classic Center in Athens. Tickets are available as part of Annual Conference registration.