Truckin’ for the Lord: Churches and Food Trucks 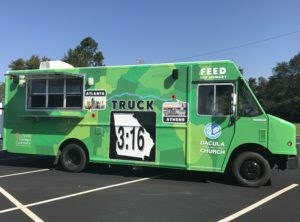 Food trucks have become increasingly popular in recent years as they bring fun, fast and affordable food to the masses. Equipped with deep fryers, cooktops, ovens and more, food trucks are literally a kitchen on wheels. It’s no wonder that churches are jumping on the food truck “bandwagon.” Combining food, fellowship and ministry, these North Georgia churches are bringing folks, food and fellowship together in new and exciting ways.

Food Truck 316
Two years ago, Dacula UMC launched an ambitious ministry project called Food Truck 316. The clever name comes from the famed Bible verse John 3:16, but also from Highway 316 which is a central artery through the Dacula/North Gwinnett area.

The idea for the food truck grew out of a year-end leadership training meeting. The church had some funds available for ministry and wanted to determine the best way to use it. They were looking for a “God-sized dream project” that would impact a lot of people. From the back of the room, church member Jim Meeker offered the first idea: "What if we had a food truck that we could use for missions and community events?" From there, the ideas started flowing quickly and a new ministry was formed.

Through private contributions from members and friends, as well as a grant from the United Methodist Office of Congregational Development, the church was able to buy a used dry-cleaning delivery truck from Chicago and give it a new life. In total, they raised just over $100,000 to put the dream into action. Before going out, there were some regulatory hurdles. Everyone who works on the truck has to be ServSafe certified on food safety and proper food handling matters. The truck is also regulated by the government and subject to inspections just like any commercial food enterprise.

Last fall, the truck made its debut at a school festival and other community events. The church now has 45 people trained and are offering another training this month to get even more folks ready to serve. The truck is completely volunteer staffed and self-funded. For every meal they sell, they can produce 2-3 meals to give away for free. Selling food at community events helps to fund the mission part.

“Right now, it's going out at least once per month for mission where we give away food to those in need, then we'll take it out when we are invited to a community event. Everything is dependent on our partnerships with other ministries and non-profits in the area so we can comply with various county ordinances. We've had some really busy months lately where it has gone out twice per week - or even twice in one day!, ” says Pastor Alex Stroud.

The food truck team just completed Emergency Response Training in September and were able to serve in their first natural disaster service trip this October in the aftermath of Hurricane Michael. Volunteers traveled to Colquitt and Miller County Georgia where they were expected to feed around 900 people. Instead, they ended up serving over 1700! The dedicated crew went above and beyond to serve hurricane victims and first responders.

“We even got some state troopers to almost smile,” Stroud laughs.

The church is continually looking for ways to grow the ministry by securing new partners and more equipment so they can serve even more people. “I didn’t know we could do something like this for the kingdom of God,” says Stroud. “Seeing the impact a simple meal can make on a life is my favorite part. We have seen God use those meals to open doors to conversations and friendships. I also get a front-row seat to see how the lives of our team members are changed every time we go out.”

“It’s amazing to bring the word of God out to the people, and as corny as it sounds, fill a stomach and fill a soul. It’s a blessing.” Meeker adds.

Savory Sundays
While it doesn’t have a food truck of its own, College Park UMC recently incorporated food trucks into their programming. Last year the church launched “Savory Sundays” as an opportunity for food trucks and folks to gather on Sunday evenings.

Rev. Katy Hinman admits that she “stole” the idea from St. James UMC in Dunwoody. St. James and The Table Atlanta host Community Food Trucks on third Thursdays (May-September) with food trucks, activities and programs in the church parking lot.

Hinman was looking for a way to build community in College Park on Sunday nights when most of their local restaurants are closed. Like St. James, College Park UMC reached out to the Atlanta Food Truck Coalition to see if they could provide food trucks. They were happy to oblige and Savory Sundays was born. On the second and fourth Sundays (June-October), the church parking lot hosts two savory and one dessert food truck along with tables, chairs, games and an Astroturf “lawn.”

The event usually draws a crowd of 100 or so – and it’s mostly community members, not regular church-goers.

“It’s been a great way to meet people in the community that I’ve never met before and see a larger cross-section of what College Park really looks like,” said Hinman. She hopes to add some ministry partnerships and offer more community services at the event in the future.

Rachel Quartarone is a freelance writer (and United Methodist) in Atlanta.