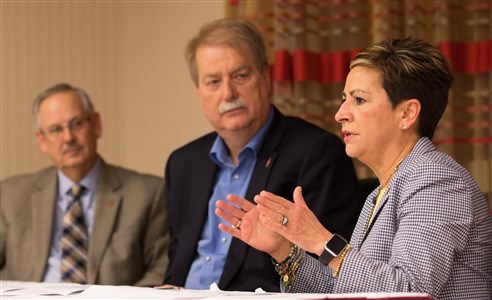 Meeting in Chicago, United Methodist bishops, including Bishop Sue Haupert-Johnson, engaged in a prayerful process to discern a way forward. At the conclusion of the discernment process, the Council of Bishops strongly approved the following motion and rationale.

Having received and considered the extensive work of the Commission on a Way Forward, the Council of Bishops will submit a report to the Special Session of the General Conference in 2019 that includes:

Rationale:  In order to invite the church to go deeper into the journey the Council and Commission has been on, the Council will make all the information considered by the Commission and the Council of Bishops available to the delegates of the General Conference and acknowledges there is support for each of the three plans within the Council.  The values of our global church are reflected in all three plans.  The majority of the Council recommends the One Church Plan as the best way forward for The United Methodist Church.

Guided by the mission, vision and scope document, the bishops agreed to recommend the One Church Plan. This plan provides conferences, churches, and pastors the flexibility to uniquely reach their missional context while retaining the connectional nature of The United Methodist Church.

The One Church Plan allows for contextualization of language about human sexuality in support of the mission; and allows for central conferences, especially those in Africa, to retain their disciplinary authority to adapt the Book of Discipline and continue to include traditional language and values while fulfilling the vision of a global and multicultural church.

This plan also encourages a generous unity by giving United Methodists the ability to address different missional contexts in ways that reflect their theological convictions. The One Church Plan removes the restrictive language of the Book of Discipline and adds assurances to pastors and Conferences who due to their theological convictions cannot perform same-sex weddings or ordain self-avowed practicing homosexuals.

“With convicted humility, bishops want to be pastors and shepherds of the whole church in order to maximize the presence of a United Methodist witness in as many places in the world as possible and with as much contextual differentiation as possible,” said newly installed Council of Bishops President Ken Carter.

The bishops expressed deep appreciation for the diligent work that the 32-member Commission on a Way Forward Commission did in formulating the three plans; the Traditionalist Plan, the One Church Plan and the Connectional Conference Plan.

While the bishops recommended the One Church Plan they affirmed that the Connectional Conference Plan and the Traditionalist Plan held values that are important to the life and work of the church and will be included in the final report to the Special Session of General Conference that the bishops have called for Feb. 23-26 in St. Louis, Missouri, USA.

Bishop Carter, who served as a one of the moderators of the Commission, said the bishops are adopting a spirit of collaboration with the Commission, and an attitude of respect for the delegations who will take up this work on behalf of the whole church.

“The Council’s prayerful deliberation reflected the diversity of the global denomination on the matter of homosexuality and many other matters.  The Council affirms the strength of this diversity and our commitment to maintain the unity of the church,” Bishop Carter said.

Full details of the plans and accompanying legislative proposals will be released as soon as final editing of the entire report is completed and translated into the official languages of the General Conference.  It is estimated this will be no later than July 8.