Leaning In To the Connection: United Methodists Partner to Serve Georgia Tech Students in Need 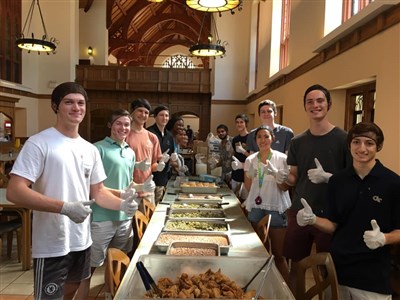 8/6/2020
In this photo (taken before the pandemic), a group of students recover leftovers from a Georgia Tech dining hall. The leftovers are packaged into containers to create single-serving meals, and then made available to food-insecure students through the campus food pantry.

We don’t always know whom we walk among. For instance, in our everyday lives, many of us feel like poverty and food insecurity happen "somewhere else." Who would think that students from all over the world who have come to learn and study with the country’s best and brightest in Georgia’s capitol city would walk among brothers and sisters facing real, life-threatening issues such as hunger and housing? But that’s exactly what happens every day and not surprisingly, COVID-19 has only exacerbated this reality.

Rev. Steve Fazenbaker is the Executive Director of the Students’ Temporary Assistance and Resources (STAR) program at the Georgia Institute of Technology in Atlanta. The five “points of the star” are food, finances, clothing, housing, and connections. Steve's role is to connect under-resourced students with the resources they need so they can be successful in college.

Before STAR, it was not clear as to where a student could go for support, according to Stephanie Ray of the school’s Dean of Students Office and who also is a member of Cascade UMC. “Now, we have a central location, and I feel our students are better supported,” says Stephanie. “Not to mention, STAR raises awareness about housing and food insecurity on campus, which has become even more important during the pandemic.”

Though the most popular of the services provided through STAR has always been the food pantry, this past Spring Break Steve suddenly found himself working a lot harder to identify housing opportunities. Students were asked to leave campus if possible, but there were many kids who couldn’t get to their families’ homes because of travel or financial restrictions, or could not travel because they are immune-compromised. With 40 percent of its student population from out of state, this alone could have become a crisis at Georgia Tech.

“Thankfully, our alumni association ran a fundraising campaign that helped us cover the costs and also prepare us for the second uptick in needs at the end of the semester,” explains Steve.

In another partnership, a group of students recently started a vegetable garden and are donating part of the produce to STAR. “These students recognize how growing your own food can improve mental and physical health and well-being,” says Steve. “With all the other pressures of college, students shouldn’t have to stress about food, and the garden helps to alleviate that stress in many ways.”

It’s no mistake that the program is being led by faithful United Methodists. Brett Hulst of St. Mark UMC in Atlanta is in the Office of Housing and Residence Life at Georgia Tech and often refers students to STAR. He describes Steve, who has served as an NGUMC extension minister on Tech’s campus since 2000, as a kind and gentle human being. “

I’ve taken students to his office when they are confused and scared and don’t know what is going to happen next, and his presence instantly changes the energy in the room to something much more comforting," said Brett.

Steve will say through God's grace he simply landed in the right place at the right time. What he says has surprised him the most is the "blurring of lines" he has witnessed among those in need.

“As an organization, we promote our services and try to reach out to folks who we believe are under-resourced, but many don’t necessarily want to respond, or think, ‘that’s not me,’” explains Steve. “The most effective way to find these students is through volunteers that were once, or still are, in the same situation. Suddenly you have under-resourced students interacting with those that are not, creating an amazing sense of community building. They are taking care of one another while removing the stigma of the needy.

“When this happens, you then truly know and feel that we are all in this together.”