Watching the Process, Watching for God 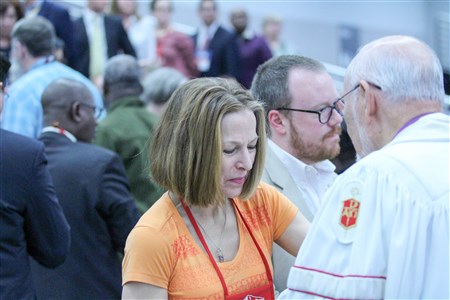 5/13/2016
Pamela Duncan, pictured receiving communion during opening worship, is a member of "New Church Atlanta" (created by the merger of Druid Hills UMC and Epworth UMC). She is attending General Conference as an observer and volunteer with our Conference Communications Office.

As lay delegate to the North Georgia Conference I have had the honor of attending several Annual Conference sessions. Thanks to Donn Ann Weber, conference secretary, the proceedings seem to run like a well-oiled machine. More than 1,000 delegates have gathered together taking turns speaking for or against resolutions at well spaced microphones on the plenary floor, and they have learned to vote using new technology.

I was beginning to feel we were in need of Donn Ann's guidance at General Conference 2016.

This week a new technology was introduced for delegates to use when they wanted to speak during the plenary sessions. At each delegate table was an iPad tablet. When a delegate wanted to make a comment they were to submit their name on the tablet which created a queue of names for the presiding bishop to view on a large screen visible only to them. The facilitating bishop would then call on one of the names on the screen. There were cultural challenges using the technology. There was confusion about who was up next or which microphone they were supposed to use. Some delegates reverted back to the placard system out of frustration. Others, who had been waiting a long time to to hear their name called, just got up and  stood in line at the closest microphone. When the requisite number of people had spoken, the queue was cleared by the facilitator and folks became angry. I kept thinking "where is God in all of this confusion?"

My question was answered in the legislative committee I attended that afternoon. I chose to sit in on Church and Society 2 because human sexuality would be discussed and that has been a very passionate topic for The United Methodist Church. The legislative committee was divided into four sub-committees which grouped similarly themed petitions together. The group I chose was the largest, 30 delegates, and that many observers who were welcomed by the chair.

I was very impressed by the sub-committee chair. In her prayer she reminded us that "at the foot of the cross we are all on level ground." She established ground rules and told the committee to speak to one another respectfully, not to interrupt, use "I" terms when speaking and not to use pejoratives. The subcommittee was mostly comprised of men and one-third were from the Central Conferences and required translation. All committee members wore headsets so that they could understand their brethren speaking in their first language.

The committee sub-chair was extremely fair. Each committee member was given three minutes to speak and the Central Conference delegates were given four minutes for translation time. She wanted everyone to feel safe and vote from their conscience. The decision was made to use electronic ballots instead of a show of hands because of the sensitivity of the subject matter. We broke often for prayer and she would ask the delegate who wanted to speak, but didn't get a chance, to lead us in that prayer. The room was emotionally charged. Observers were clearly upset and in tears. There was a great deal of hurt in the room but the chair kept everyone on a calm, even course. The sub-committee only discussed three petitions out of the assigned 40 and all three were rejected by majority vote.

The session ended with prayers, singing in other languages, and a benediction. I was reminded of the global nature of our church and how delegates have traveled half way round the world  to discuss issues that are very near and dear to their hearts. There are vast cultural differences and I don't know if we will ever reconcile those differences.

Where is God in all this?

God is in the process. God is in the listening to each other's stories, hearing other's perspectives and trying to understand their world view.  God is in how we interact with one another in Christian love. God is in the confusion and the chaos reminding us that we are all God's children. And God will stay with us as we struggle over the next week to make disciples of Christ for the transformation of the world.

Pamela Duncan is a member of "New Church Atlanta" and is attending General Conference as an observer and volunteer with the Conference Communications Office.
News