Welcome to M-LAB: An Innovation Collaborative for United Methodists 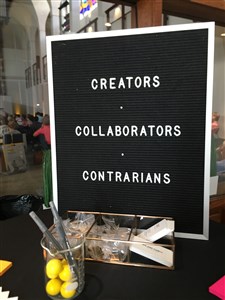 Clergy from across several Annual Conferences are being steeped in a new way of thinking and deepening connections thanks to a three-day immersive event called M-LAB.

UMC M-LAB (Movement – Learning Action Board) was created to bring together outwardly-focused United Methodists to incubate and prototype new ideas that will shape the future of our church.

A collaborative effort of the North Georgia, Florida, and Nashville Episcopal areas, this experience focuses on design thinking and creative innovation techniques. For those fueled by the Holy Spirit, these tools create better listeners, planners, and implementers of ministry.

The Annual Conferences have held two M-LAB experiences so far this year, one in January and one in September, both at The Portico in Tampa. 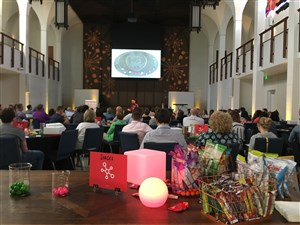 “This generation of leaders has a unique challenge,” explained McAlilly. “They need to be equipped to serve the church that is and the church that’s emerging. Offering this opportunity is one way to walk with them, to teach them to prototype an idea and refine it.”

Each of the three bishops expressed that the most important part of the experience is building relationships across Conference lines.

The goal is to build a network of creative clergy and leaders and to teach them skills like design thinking -- skills to function in a new way.

In the summer of 2017, the bishops pulled together a design team to shape their idea. They began by inviting a second person from each area (Rev. Tom Laney, Rev. Alex Shanks and Rev. Phil Schroder), then brought in professionals like Claire Bowen, a corporate consultant and United Methodist lay person.

We Are Curio, an innovation studio that works with clients to expand on ideas, began meeting with the design team last summer.

“What we heard was a pain point helping pastors innovate within the United Methodist movement,” said Hillary Demeo of We Are Curio. “We realized these pastors not only need to collaborate but learn from each other.”

“There is no shortage of critique in the church,” said Bishop Carter. “We sometimes have more critique than creativity”

That’s why design thinking was so important to the education. Participants learn that failing is part of the process.

“It's really not failure if you're learning from it. Ideas just have to get into the world and get started somewhere,” said Demeo.

At the January M-LAB event, 40 clergy each from the Nashville, North Georgia and Florida Episcopal Areas attended. In September, 40 more from those areas, plus clergy from Western North Carolina and South Georgia attended along with guests from the General Board of Higher Education among others.

In each case, cohorts were nominated from different streams for a variety of reasons, with the hope that participants would come from diverse contexts.

Recently a new cohort was invited to participate in a November M-LAB event for clergy and laity to attend together.

By end of 2018, there will be more than 500 clergy and church leaders who have participated in the experience. 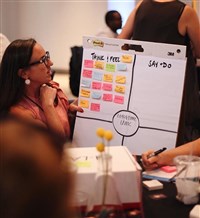 At the two 2018 events, participants took part in daily hands-on creativity exercises. The 20 circles test challenged everyone to transform 20 blank line-drawn circles into something else in a few minutes. Soon the circles were filled with markings of a baseball, made into glasses, shaped like a sun.

Afterward, the participants began thinking of ways they might innovate in their own community. Starting with a blank napkin and a marker, the ideas eventually took shape

“On the last day everyone had a chance to pitch their idea,” said Demeo. “Everybody had an idea, at least something to start with.”

The pitch winner got funds to help launch their vision. 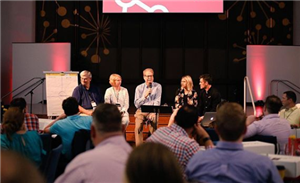 Over the three days, the bishops spoke as a panel and individually to the group.

“One of the most powerful moments was when the bishops gave this broad permission,” said Demeo. “They said, we invite you to try and fail, and try again.”

At night the bishops prayed over the pastors. They shared meals together with the clergy and shared their vision.

“My advice to you as pastors is to pray to the Holy Spirit for direction, tell people about Jesus, and lead your people well,” said Bishop Sue.

Jason Demeo of We Are Curio gave lessons and advice on design thinking and led group discussions.

Nationally recognized change-makers spoke to the group. The design team asked speakers to address important topics. How do people with very little power make change? What do you wish clergy knew? 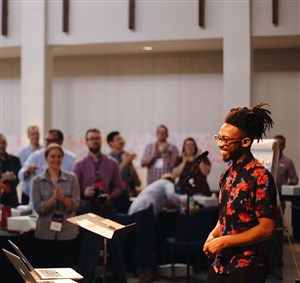 Andre Henry, a young theologian and activist, challenged the group to articulate a gospel that makes sense in today’s context. He anchored his message in a word he got from a friend: “We want to see the presence of God in the land of the living.”

He spoke to the group about where faith intersects racial justice, and how loving your neighbor means showing up for your neighbor.

“You build unity by building trust and you build trust by listening to each other,” said Henry. “We need to practice listening respectfully. Listen to each other’s prayers.”

Cole Nesmith, founder of The Creative City Project, spoke to M-LAB about transforming and designing culture.

Nesmith warned of building walls of opinion between ourselves and others.

“Some of the things we are talking about are irrelevant to the people outside the church,” he said. “Move from the church bubble into the world.” 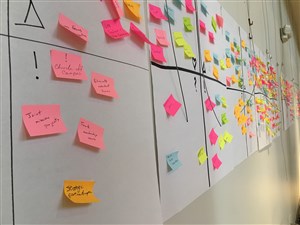 And participants have already begun putting their ideas to work.

North Georgia Conference staff painted several walls around the office with “idea paint” making them giant whiteboards for collaboration and community messages. Decatur First UMC turned a storage room into a sound studio where they’ll record a podcast. Organizers of a clergywomen’s gathering centered on art as a way of expression rather than a traditional workshop or learning experience.

But it’s too soon to evaluate even the ideas pitched at the January event.

“You can't start analyzing,” said Demeo. “120 seeds were planted, so we can't start eating the fruit yet, but we’re starting to see some sprouts.”

“M-LAB for me has been a time to spark creativity,” he said. “It’s about the freedom to start something new that could change someone’s life.”

Rev. Cassie Rapko said M-LAB in January spoke to her creative side that can sometimes be diminished in the normal hustle and bustle of ministry.

“So often we are afraid to try new things because we are afraid to fail,” said Rapko. “I realized that I didn't have many failures in my ministry, but that wasn't because I was good, that was because I wasn't taking any risks! At M-LAB we talked about prototyping and constantly trying new things and learning from our failures. M-LAB helped me to embrace trying new things and taking risks in my ministry. The results have been fabulous, fun, and with not as much pressure since I know that if something fails, it will be a wonderful opportunity to learn something.”

And that’s the intention.

“M-LAB is much more than one training,” said Demeo, speaking on behalf of the design team. “This is something we believe in.”

Inside Innovation: The Portico Hosts M-LAB
Open Ears: Hearing from Change-Makers At M-LAB