There is no place in Methodism that has seen more episcopal elections than Stuart Auditorium on the campus of Lake Junaluska. By the close of the afternoon session July 13, five new bishops had been elected in the historic building that has been the site of the Southeastern Jurisdictional Confernce since 1956.
Among the five new bishops is the first African-American female bishop elected by the Southeastern Jurisdiction, the Rev. Sharma Lewis. In addition to Lewis, the jurisdiction elected the Rev. David Graves, the Rev. Leonard Fairley, the Rev. Dr.
Lawson Bryan, and the Rev. Sue Haupert-Johnson. 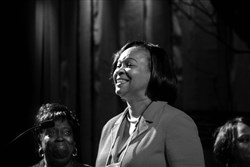 The Rev. Sharma D. Lewis was elected on the first ballot at the jurisdiction’s quadrennial meeting at Lake Junaluska, N.C.
“I was called by God and I made myself available, not just to a position, but to follow God’s will,” said Rev. Lewis. “I am excited, and I am really humbled. At 52 years old, I am excited that my next phase of life will be as an episcopal leader. I am humbled to the fact that this is historic.”
Lewis is the first African-American woman elected in the denomination since 2000. The first-ever African-American female bishop in The United Methodist Church, Bishop Leontine Kelly, was from the Virginia Annual Conference but was elected in 1984 by the Western Jurisdiction of the UMC.
Addressing the Conference, Lewis named Bishop Kelly and each of the African American female bishops elected by The United Methodist Church in the U.S. and each of the women elected bishop in the SEJ.
“The reason I’m calling the role is because I know that those women broke the ceiling for me to stand here today,” she said. 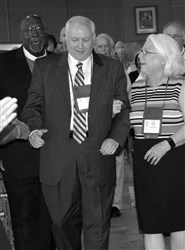 David Graves
The Rev. David Graves, senior pastor of Church Street United Methodist Church in the Holston Annual Conference was elected Wednesday afternoon on the fourth ballot.
“I want to thank you, the Southeastern Jurisdictional Conference, for putting your faith in me,” Graves said after his election. “So we go forth to win people to Christ, see the unseen, transform lives, and help the United Methodist Church change the world.”
Graves was nominated by the Holston Conference. Prior to coming to Church Street, he served six years as superintendent for the Kingsport District of the Holston Conference. In 2011 and 2012, he served as dean of the Cabinet.
In his post-election remarks, Graves thanked Bishop Clay Lee for ordaining him, Bishop Ray Chamberlain for believing in him, and Bishop James Swanson for appointing him as a district superintendent. He thanked his current bishop, Bishop Mary Virginia Taylor “who I have known for 40 years and who was my associate pastor when I was growing up at Fountain City United Methodist Church.” 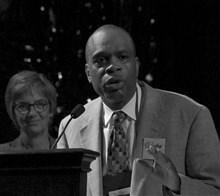 The third bishop elected by the delegates, the Rev. Leonard Fairley, is Capital District superintendent in the North Carolina Conference
As the Capital District superintendent, Fairley serves as the chief missional strategist and spiritual and administrative leader to 96 churches and 134 pastors in a geographic area that includes Raleigh, Cary, Garner, Clayton, Smithfield, Benson, Goldsboro, Knightdale, and Wendell.  The North Carolina Conference includes churches in 56 eastern North Carolina counties.
He is a graduate of what is now United Methodist-related Pfeiffer University and Duke University’s School of Divinity. His church appointments have included pastor at the Sanford Circuit, St. Peter’s United Methodist Church in Hamlet, Soapstone United Methodist Church in Raleigh, Saint Francis United Methodist in Cary, and as the Rockingham District superintendent. He also has published a book of poetry, “Who Shall Hear My Voice.” 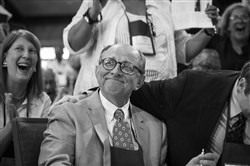 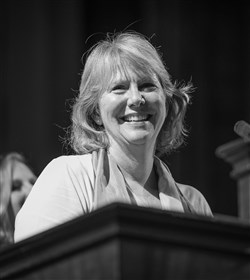 The Rev. Sue Haupert-Johnson, a district superintendent in the Florida Annual Conference, was the fifth bishop elected.
I hope you will go and spread a table “with a sumptuous gospel feast,” she bid the delegates. In her introduction address on Tuesday, Haupert-Johnson stressed the need for the church to have room for everyone at God’s table.
Haupert-Johnson, nominated by the Florida Conference, is the current district superintendent of Florida’s Gulf Central District. She served as North Central District superintendent since July 2013, overseeing a church landscape of large and small congregations in a mix of urban, suburban and rural communities. The district’s demographics are diverse as well, including African-American, Haitian, Hispanic and Native American worshipers.
Before that, she served as pastor of churches in Tampa, Cape Coral and Ocala, and was an associate pastor at First UMC, Lakeland. She holds a law degree from the University of Florida and was a litigator with a Tampa law firm before answering the call to ministry and graduating summa cum laude from Emory University’s Candler School of Theology. She was ordained a deacon in 1996 and an elder in 1998.
Haupert-Johnson has had numerous leadership roles in the Florida Conference and has represented the Florida UMC twice at General Conference – serving as Judicial Administration Legislative Committee chairperson in 2012 – and three times at jurisdictional conference.

Consecrating the bishops
A consecration service for the five new bishops will be held at 10:00 a.m. EDT Friday, July 15, at Lake Junaluska. The ceremony can be watched live at the Lake Junaluska Conference and Retreat Center’s website.
Within the United States, local United Methodist churches are organized into increasingly larger groups: numerous districts, dozens of annual conferences and five jurisdictions (regions). Thirteen active bishops now lead the 15 annual conferences that form the South Eastern Jurisdiction.
A United Methodist bishop is elected for life. Typically, a bishop will serve in a specific annual conference for eight years. The United Methodist Book of Discipline, the denomination’s law book, directs each bishop to “guard the faith, order, liturgy, doctrine, and discipline of the Church” and to “lead all persons entrusted to their oversight in worship, in the celebration of the sacraments, and in their mission of witness and service in the world.” Bishops also are to be “prophetic voices and courageous leaders in the cause of justice for all people.”
The states represented in this jurisdiction are: Alabama, Florida, Georgia, Kentucky, Mississippi, North Carolina, South Carolina, Tennessee and Virginia.
--Sybil Davidson, Annette Spencer, Derek Leek, Mary Catherine Phillips, and Gretchen Hastings