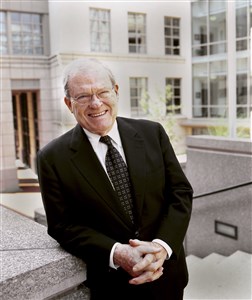 Rev. Dr. James Laney, president emeritus of Emory University and a former United States ambassador to South Korea, will soon receive the 2019 World Methodist Peace Award from the World Methodist Council in recognition of his continuing efforts on behalf of the people of Korea. Considered to be the highest honor bestowed by Methodists around the world, the award is presented annually to individuals or groups who have made significant contributions to peace, reconciliation and justice. Past recipients include Nelson Mandela, Mikhail Gorbachev and President Jimmy Carter.

Presentation of the award will take place on Thursday, November 21, 2019 at UMC General Board of Global Ministries, 458 Ponce de Leon Avenue, NE Atlanta, GA 30308. A service will take place at 7 p.m. with a reception immediately to follow. The event is free and open to the public. For planning purposes, organizers are requesting attendees to register at https://www.eventbrite.com/e/world-methodist-council-honors-rev-dr-james-t-laney-tickets-76818743931?aff=eprofsaved.

According to the World Methodist Council, Laney has been selected to receive the award for his extraordinary and continuing efforts on behalf of the people of Korea.  His association with Korea began in 1947 when he served there in the Army Counter-Intelligence Corps. He returned in 1959 as a missionary with his family. In 1993, he returned to Korea for the third time when he was appointed ambassador to South Korea by President Bill Clinton. The first North Korean nuclear crisis started in 1994, and the U.S. was on the edge of war with North Korea. Laney helped diffuse the crisis by tirelessly working with President Clinton and former President Jimmy Carter to avoid an attack on North Korea.

In 1997, he returned to the U.S. where he served for two years as special presidential envoy in Asia. From 1997 to 2003, he co-chaired the Council on Foreign Relations Task Force on Korea.