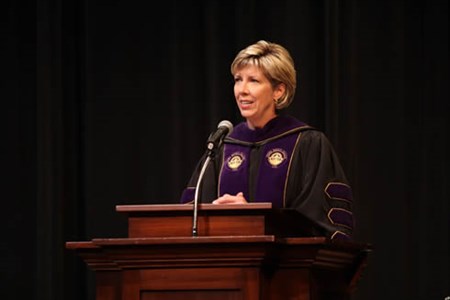 Young Harris College President Cathy Cox has announced that she will formally step down from the position in June 2017 to accept the role of dean of Mercer University’s School of Law, her alma mater.

During her 10-year tenure as president, Cox has led the College through an unparalleled period of growth, transitioning it from a two-year to a four-year college, more than doubling the size of the faculty and student body, and constructing $100 million in new facilities, while staying true to its United Methodist heritage. Under her leadership, the College has developed 21 new baccalaureate degree programs and 22 minors, gained NCAA Division II membership, and celebrated the most successful capital campaign in YHC’s history.

“It has been a privilege to work alongside Cathy to transform Young Harris College into this progressive model of a 21st-century liberal arts education,” said Brantley Barrow, ’74, Chairman of the Board of Trustees. “She has successfully led YHC through the transition to a baccalaureate degree-granting institution now recognized as a ‘Best National Liberal Arts College’ by U.S. News & World Report. On behalf of the Board of Trustees, I thank Cathy for her service and dedication to Young Harris and our students.”

Under Barrow’s leadership, Young Harris College will begin a national search immediately to fill the position.

“Getting to work with and alongside the faculty and staff, who personify every day what it means to be committed to student success, has been gratifying beyond words,” said Cox. “Getting to know so many of our students—and watching them pursue and achieve their dreams, has without question provided me with meaningful experiences I will never, ever forget.”

“I’m very proud of all that we have collectively accomplished, through enormous hard work and vision, to grow Young Harris into the thriving liberal arts college it is today,” Cox continued. “I am confident that the foundation we’ve built will serve as a great platform for even further success in the years to come.”